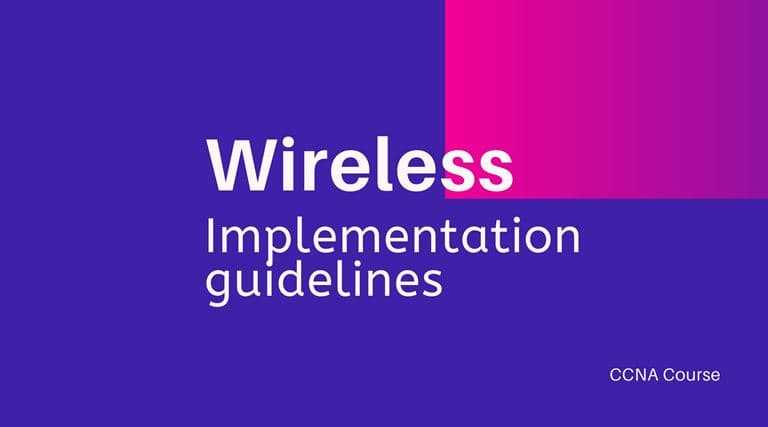 Webster’s dictionary defines “topology” as a branch of mathematics concerned with properties of geometric configurations  (such as point sets) that are unaltered by elastic deformations (as stretching or twisting) that are homeomorphism. The CCNET and CCNA exams stop short of requiring a full understanding of homeomorphism (or elastic deformation, for that matter). However, the exam does require you to have some knowledge of the placement of wireless access points in your corporate network. The first piece to understand is that anyone can deploy a wireless network in one of two forms: ad hoc or infrastructure.

This type of network can be created by users on-the-fly to share files or services with others. For example, someone on an airplane might want to share a folder or files with the person next to her. She can create an ad hoc wireless network and allow the other person to join and access the shared files over a network connection.

Ad hoc networks typically are very limited in range and security capabilities. You may want to consider restricting laptops in your corporation from starting ad hoc wireless networks because they could be considered a potential security vulnerability.

An ESS is a wireless topology (note the word change from “network” to “topology”) that includes two or more wireless access points providing extended wireless coverage across the network as shown in the picture below.

In the picture below notice that the wireless coverage overlaps. Wireless best practices state that you should have a 10 to 15% overlap in your wireless coverage. This allows you to implement seamless roaming, allowing a wireless client to move between access points with no service interruption. This is not as critical for data clients, such as laptops. Rather, real-time wireless clients such as 802.11 compatible cell phones, cordless VoIP phones, and some PDAs benefit from the overlapping coverage. Imagine dropping a phone call anytime you moved more than 300 feet in the network. More steps are involved in implementing seamless wireless roaming, but the 10 to 15% overlapping coverage is the starting point.

So you purchased a new 802.11g wireless access point and implemented it with clients running 802.11g cards. 54Mbps of pure wireless speed right? Wrong! You may have purchased an access point capable of handling 54Mbps, but you will never reach that speed. Never! Repeated performance tests have revealed that actual data rates are about half of the theoretical data rates, on average. This means that your 802.11b access point typically averages about a 5Mbps actual data rate. 802.11g usually is in the 20Mbps range. You might be wondering why the standard says that you can handle 54Mbps when the actual throughput is much less. Well, there are many reasons.

Suppose you travel to the moon in an oxygen-free environment. You carry a single wireless access point and a single wireless card plugged into a single solar-powered laptop that does nothing but runs the wireless card (no Bluetooth, no electrical interference). You sit with the wireless access point about feet from the laptop and only send or receive data (never both). You might get close to the 54Mbps capability. But even that is stretching it. When you move from the world of cables into the world of wireless, you open to an entirely different style of communication. One of the first considerations that you’ll notice is the truth behind the range of the access point. Yes, in an obstruction-free environment, the 802.11b/g wireless signal can travel 300 feet. But couple that fact with the idea that higher data rates (11Mbps for 802.11b and 54 Mbps for 802.11g) require stronger signals. You’ll find that the data rates step down the farther you go from the access point. The following steps are defined for each standard.

So, when you picture wireless data rates coming from your wireless access point, think of them as a radial circle for each rate, with the rates continually decreasing the farther you go. This is represented in the picture below.

You’ll notice that no exact measurement is attached to each of the radial circles dictating speed around the wireless access point. That’s because range is not the only criterion to consider when determining wireless data throughput. You’ll remember that wireless shares the unlicensed FCC frequency bands with many other pieces of equipment. Bluetooth, other 802.11 wireless clients, cordless phones, and microwave ovens are just a few that can cause interference. Couple that with typical obstructions such as walls, cubicles, desks, and so on, and you have a wireless signal that varies from the business environment to the business environment. It is impossible to say just how far and “clean” the signal will be in your specific environment. Many companies make testing equipment that displays the signal strength and data rate to a laptop or PDA screen. This gives you a good idea of how wireless will fare in your environment.

The saving grace of wireless data rates is the fact that most users will not notice. Most devices that use a wireless signal are used for lower-bandwidth communication. For example, a wireless VoIP phone consumes about 100Kbps of bandwidth. Laptops used in a wireless environment typically surf the net or check email. Most devices that handle large data file transfers or other high-bandwidth communication typically are hardwired.

With all those considerations floating around your mind, here are the general steps to implement wireless:

Working through these four steps, you have established a baseline for your wireless network. As you add more features or security standards on top of the existing foundation, you can return to a “last known good” configuration if something goes wrong.

Wireless troubleshooting is far more complex than typically wired troubleshooting. Physical problems are must more elusive, because they deal primarily with interference rather than a simple cable break or failing switch port. For example, we recently deployed in a business a wireless network that worked great until 4 in the afternoon. As soon as we crossed the 4 pm barrier, all wireless connectivity was lost. After doing some spectrum analysis, we found that a nearby airport was using a device that completely flooded the 2.4GHz frequency range. The company decided to move to 802.11a (which was a fairly large network upgrade) to avoid this interference.

Likewise, wireless technology is fairly new to the industry. You may find that firmware for your access point has bugs and needs to be upgraded to a newer version to avoid persistent crashing (this happens for more often than you realize). The following wireless troubleshooting checklist may be helpful as you attempt to diagnose the issue.

Most wireless issues are related to the client.

Most troubleshooting that deals with the wireless access point focus on physical considerations: