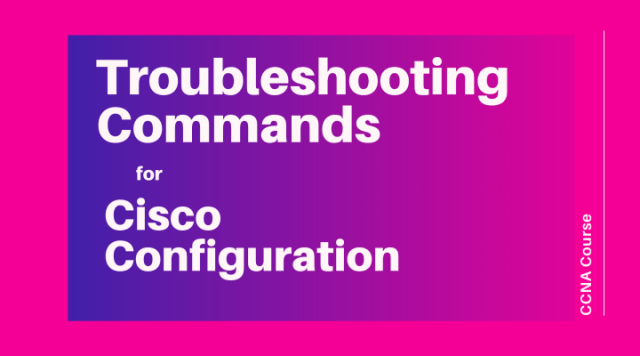 Troubleshooting a Cisco device and the networks to which it is connected is an integral part of being a Cisco administrator. Most of your troubleshooting can be solved by verifying your configurations and the device’s operations, using the show commands mentioned in the previous article. However, at times you may need to use additional commands to help identify and troubleshoot faults in the network.

Specifically, the clear command in Privileged EXEC resets statistical information that is being stored for the outputs of your show commands. For example, if you saw the output of the show interfaces serial 0/0 command and noticed excessive late collisions, how do you know whether those are recent statistics or collisions that occurred last week? Using the clear counters commands resets those statistics so you can view up to date information from the show interfaces output.

One of the most widely utilized commands for troubleshooting is the ping command. Ping uses ICMP echo and echo reply messages to verify connectivity to IP devices. To ping a specific device from EXEC or Privileged EXEC, enter ping followed by the IP address or hostname of the device you are trying to verify, as follows:

Notice that the ping response contains a period (.) followed by four exclamation marks (!). An exclamation mark character is indicative of a successful receipt of a reply to the ping. The period character indicates that a timeout has occurred for that particular ICMP echo packet. In some instances, you may receive a U character, which signifies a Destination Unreachable ICMP message. These messages are indicative that a router along the packet’s path to the destination did not know how to reach the destination network. When this occurs, the router sends a Destination Unreachable message back to the packet’s source.

Similar to other operating systems, you can manipulate some of the options in a ping echo request, such as the datagram size and the timeout period in the Cisco IOS. To specify these options, you need to use an extended ping command. This command requires you to be in Privileged EXEC and is used by typing ping followed by the Enter Key (no IP address). From there you can change the default parameters such as the datagram sizes, timeout, and the number of packets sent, as shown in the following example,

The final troubleshooting command (for now) is another exclusive Privileged EXEC command that should be used only when all other troubleshooting has failed. The debug command displays real-time information on such things as routing updates, packet forwarding, and interface keep alive, to name a few. The reason behind the cautionary tone of this explanation is because the debug command is very processor-intensive and can generate a lot of information on your terminal screen. For this reason, it is highly recommended that you use these commands only in emergency situations or in a lab environment. If you must troubleshoot on a production router, be sure to issue the show processes command as follows:

The majority of the output will not make sense; however, the top of the output lists the CPU utilization up to the last 5 minutes. If any of these values exceeds 60%, do not use the debug commands. If you do, your router is likely to seize up from over-utilization.

Backing up and restoring configurations and IOS using TFTP

Recall from the “saving configurations” article that you used the copy command to copy the running config in RAM to the startup config in NVRAM. By using this command, you are basically copying this configuration file from one file system component to another. Such is the case if you want to back up and restore configurations and IOSs to and from a TFTP server. A fair amount of setup and preparation is required to achieve this functionality, but the rewards of being able to back up and restore these files are well worth it. Specifically, the following preparations need to be in place for your switch or router to transfer these files to and from a TFTP server.

After all the preparations are in place, and you have verified connectivity between the TFTP server and your Cisco router or switch, you can use the copy command again to transfer files. Remember, copy command instructs the IOS to copy from somewhere to somewhere. The available keywords, once again, are starup-config, running-config, tftp, and flash. When the tftp keyword is used, the IOS follows up with a few subsequent questions to help the IOS identify the IP address of the server, and the filenames of the source and destination files.

For example, to copy the IOS from a TFTP server to the flash memory of the router, your command would look something like the following:

Similarly, if you need to upgrade your IOS to a new version or you want to restore a previously backed up IOS from your TFTP server, the command would be copy tftp flash. Remember, if your flash memory does not have enough space for your current IOS file and the new one, the process erases your old IOS file to make room for the new one. If you accidentally lose power during the file transfer, you inevitably end up in ROM mon. At that point, you can download the IOS again from the TFTP server or copy the image over the console.

After the IOS image is loaded to your flash memory, you have to reboot the device for that IOS to run (because your current IOS is still decompressed and running in RAM). To reboot a Cisco device, use the reload command from Privileged EXEC. Do not forget to save any configuration changes that you made with the copy running-config startup-config command before rebooting the device because the router or switch uses the contents of your startup configuration when it reinitializes. In many current IOS version, the IOS reminds you that your configuration has modified and asks you whether you want to save it. Answering “Yes” to this prompt saves your configuration to NVRAM.

Imagine it is your first day at work and your boss wants you to create a topology map of the network, including model numbers, IPs, and IOS versions of all the Cisco equipment. Eager to impress the boss, you want to get this task done as soon as possible. The problem is that the equipment isn’t allocated in the same building and your security badge won’t allow you into other buildings. Thus, console access isn’t possible and you don’t know the IP addresses of the other devices to use SSH or Telnet into them. Instead of spending that free time looking in the want ads because you are afraid you are going to get fired, you can call upon a very useful protocol called Cisco Discovery Protocol (CDP) to gather information of directly connected Cisco neighbors.

As the name indicates, CDP is a Cisco proprietary protocol that operates at the Data link layer. One unique feature about operating at Layer 2 is that CDP functions regardless of what physical layer media you are using (UTP, fiber, and so on) and what Network layer routed protocols you are running (IP, IPX, AppleTalk, and so on). CDP is enabled on all Cisco devices by default, and is multicast every 60 seconds out of all functioning interfaces, enabling neighbor Cisco devices to collect information about each other. Although this is a multicast message, Cisco switches do not flood that out to all their neighbors as they do a normal multicast or broadcast.

The amount of information you can display ultimately depends on the command you use. For instance, the following example illustrates the output of the show cdp neighbors command;

The following table explains the output depicted in the proceeding example.

Based on this information, you can already begin to see the topology layout of these three devices, as illustrates in the following picture.

At this point, I am sure you are completely in awe of the wonders the CDP can bring to your administrative duties; however, there are times you may wish to disable CDP. As mentioned before, CDP is a Cisco proprietary protocol enabled by the default on all Cisco devices.

So what happens when you are not connected to a Cisco device? Although the bandwidth usage is minimal, it still serves no purpose to continue sending CDP advertisements to non-Cisco devices that cannot interpret this protocol. In addition, it is a good idea to disable CDP for security reasons because you can gain so much useful information that could prove fatal in the wrong hands.