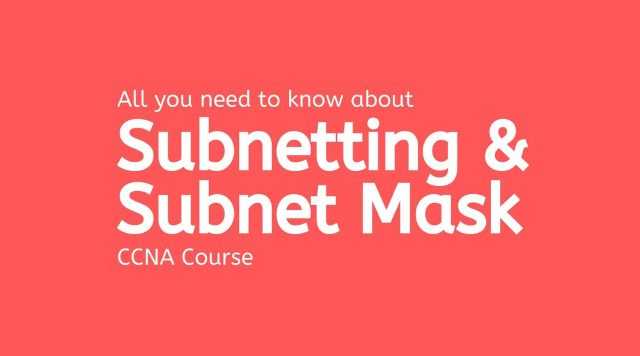 In the previous articles, we have learned how to define and find the valid host ranges used in Class A, Class B, and Class C network address by turning the host bits all off and then all on.

This is very good, but here’s the catch: we were defining only one network. What happens if you wanted to take one network address and create six networks from it? You would have to do something called Subnetting because that’s what allows you to take one larger network and break into a bunch of smaller network.

There are loads of reasons in favor of subnetting, including the following benefits:

The network administrator creates a 32 bit subnet mask composed of 1s and 0s. The 1s in the subnet mask represents the positions that refer to the network or subnet addresses.

Not all networks need subnets, meaning they use the default subnet mask. This is basically the same as saying that a network doesn’t have a subnet address.

The following table shows the default subnet masks for Class A, B, and C. These default masks cannot change. In other words, you can’t make a Class B subnet mask read 255.0.0.0. If you try, the host will read that address as invalid and usually won’t even let you type it in. for a Class A network, you can’t change the first byte in a subnet mask; it must read 255.0.0.0 at a minimum.

Another term you need to familiarize yourself with is Classless Inter-Domain Routing (CIDR). It’s basically the method that ISPs (Internet service providers) use to allocate a number of addresses to a company, a home or a customer. They provide addresses in certain block size, something I’ll be going into greater detail later in this article.

When you receive a block of addresses from an ISP, what you get will look something like this: 192.168.10.32/28. This is telling you what your subnet mask is.

The slash notation (/) means how many bits are turned on (1s). obviously, the maximum could only be 32 because a byte is 8 bits and there are 4 bytes in an IP address. But keep in mind that the largest subnet mask available regardless of the class of address can only be a 30 because you’ve got to keep at least 2 bits for host bits.

There are many different ways to subnet a network. The right way is the way that works best for you. In a Class C address, only 8 bits are available for defining the hosts. Remember that subnet bits start at the left and go to the right, without skipping bits. This means that only Class C subnet masks can be of the following:

We can’t use a /31 or /32 because we have to have at least 2 host bits for assigning IP addresses to hosts. In the past, I never discussed the /25 in a Class C network. Cisco always had been concerned with having at least 2 subnet bits, but now, because of Cisco recognizing the IP subnet zero command in its curriculum and exam objectives, we can use just 1 subnet bit.

I could easily devote an entire article to Variable Length Subnet Masks (VLSMs), but instead, I’m going to show you a simple way to take one network and create many networks using subnet masks of different lengths on different types of networks designs. This is called VLSM networking.

Neither RIPv1 nor IGRP routing protocols have a field of subnet information, so the subnet information gets dropped. What this means is that if a router running RIP has a subnet mask of a certain value, it assumes that all interfaces within the classful address space have the same subnet mask. This is called a classful routing, and RIP and IGRP are both considered classful routing protocols. If you mix and match subnet mask lengths in a network running RIP or IGRP, that network just won’t work!

Classless routing protocols, however, do support the advertisement of subnet information. Therefore, you can use VLSM with routing protocols such as RIPv2, EIGRP, and OSPF. The benefit of this type of network is that you save a bunch of IP address space with it.

As the name suggests, with VLSMs we can have different subnet masks for different router interfaces. The following figure shows an example of why classful network designs are inefficient.

Looking at this figure, you’ll notice that we have two routers, each with two LANs and connected together with a WAN serial link. In a typical classful network design (RIP or IGRP routing protocols), you could subnet a network like this:

Our subnets would be (you know this part, right?) 0, 16, 32, 48, 80, etc. this allows us to assign 16 subnets to our internetwork. But how many hosts would be available on each network? Well, as you probably know by now, each subnet provides only 14 hosts.

All hosts and router interfaces have the same subnet mask again, this is called classful routing. And if we want this network to be more efficient, we definitely need to add different masks to each router interface.

But there’s still another problem the link between the two routers will never use more than two valid hosts! This wastes valuable IP address space, and it’s the big reason I’m going to talk to you about VLSM network design.

Let’s take the above figure and use a classless again which will become the new network shown in the picture below. In the previous example, we wasted address space one LAN didn’t have enough addresses because every router interface and host used the same subnet mask. Not so good.

What would be good is to provide only the needed number of hosts on each router interface. To do this, we use what are referred to as a Variable Length Subnet Masks (VLSMs).

Now remember that we can use different size masks on each router interface. And if we use a /30 on our WAN links and a /27, /28, and /29 on our LANs, we’ll get 2 hosts per WAN interface, and 30, 14, and 8 hosts per LAN interface nice! This makes a huge difference not only can we get just the right amount of hosts on each LAN, we still have room to add more WANs and LANs using this same network.

To create VLSMs quickly and efficiently, you need to understand how block sizes and charts work together to create the VLSM masks. The table given below shows you the block sizes used when creating VLSMs with Class C networks.

The next step is to create a VLSM table. The figure below shows you the table used in creating a VLSM network. The reason we use this table is so we don’t accidentally overlap networks.

With a block size of 64, you can have only four networks, and so on, all the way to having 64 networks if you use only block sizes of 4. Remember that this takes into account that you are using the command IP subnet-zero in your network design.

Now, just fill in the chart in the lower-left corner, and then add the subnets to the worksheet and you’re good to go.

So let’s take what we’ve learned so far about our block sizes and VLSM table and create a VLSM using a Class C network address 192.168.10.0 for the network in the figure 3.6. The fill out the VLSM table, as shown in figure 3.7.

In the figure 3.6, we have four WAN links and four LANs connected together. We need to create a VLSM network that will allow us to save address space. Looks like we have two block sizes of 32, a block size of 16, and a block size of 8, and our WANs each have a block size of 4. Take a look and see how it has been filled out our VLSM chart in figure 3.7.

We still have plenty of room for growth with this VLSM network design.

We never could accomplish that with one subnet mask using class ful routing. Let’s do another one. Figure 3.8 shows a network with 11 networks, two block sizes of 64, one of 32, five of 16, and three of 4.

First, create your VLSM table and use your block size chart to fill in the table with the subnets you need. figure 3.9 shows a possible solution.

Notice that we filled in this entire chart and only have room for one more block size of 4! Only with a VLSM network can you provide this type of address space savings.

Okay you have three locations you need to address, and the IP network you have received is 192.168.55.0 to use as the addressing for the entire network. You’ll use ip subnet zero and RIPv2 as the routing protocol. Figure 3.10 shows the network diagram and the IP address of the Router A S0/0 interface.

from the list of IP addresses on the right of the figure, which IP address will be placed in each router’s FastEthernet 0/0 interface and serial 0/1 or Router B?

Figure 3.11 shows the answers to this question.

Once you figured out the block size needed for each LAN, this was actually a pretty simple question all you need to do is look for the right clues and, of course, know your block sizes.

One last example of VLSM design before we move on to summarization. Figure 3.12 shows three routers, all running RIPv2. Which class C addressing scheme would you use to satisfy the needs of this network yet save as much address space as possible?