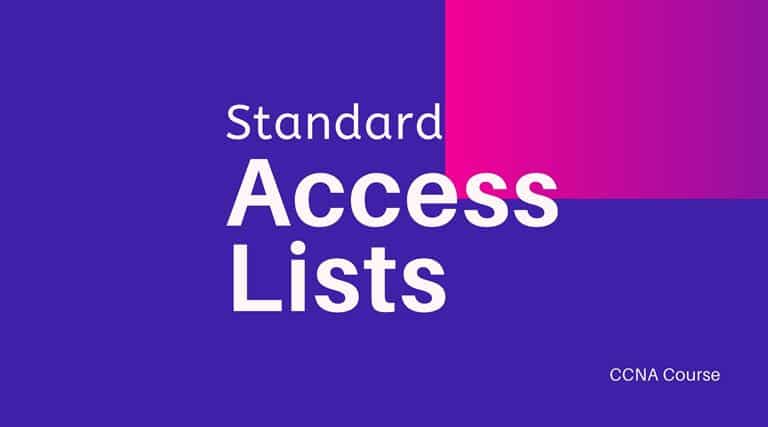 The following is an example of the many access-list numbers ranges that you can use to filter traffic on your network (the protocols for which you can specify access lists depend on your IOS version.):

As we said, by using the access-list numbers 199 or 13001999, you’re telling the router that you want to create a standard IP access list.

After you choose the access-list number, you need to decide whether you’re creating a permit or deny statement. For this example, you will create a deny statement.

The next step requires a more detailed explanation. There are three options available. You can use any parameter to permit or deny any host or network, you can use an IP address to specify either a single host or a range of them, or you can use the host command to specify a specific host only. The any command is pretty obvious any source address matches the statement, so every packet compared against this line will match. The host command is relatively simple. Here’s an example using it:

This tells the list to deny any packets from host 172.16.30.2. the default parameter is the host.

What’s wildcard masking? You’ll learn all about it using a standard access list example, as well as how to control access to a virtual terminal, in the following sections.

Wildcards are used with access lists to specify an individual host, a network, or a certain range of a network or networks. To understand a wildcard, you need to understand what a block size is; it’s used to specify a range of addresses. Some of the different block sizes available are 64, 32, 16, 8 and 4.

Wildcards are used with the host or network address to tell the router a range of available addresses to filter. To specify a host, the address would look like this:

The four zeros represent each octet of the address. Whenever a zero is present, it means that octet in the address must match exactly. To specify that an octet can be any value, the value of 255 is used. As an example, here’s how a /24 subnet is specified with a wildcard:

This tells the router to match up the first three octets exactly, but the fourth octet can be any value.

But just in case, we’ll go through some examples to help you nail it. The following example tells the router to match the first three octets exactly but that the fourth octet can be anything:

The next example tells the router to match the first two octes and that the last two octets can be any value:

Try to figure out this next line:

Here are two more things to keep in mind when working with block sizes and wildcards:

It’s very important to know that any command is the same thing as saying the following using wildcard masking:

Since the wildcard mask says that none of the octets are to be evaluated, every address matches the test condition. So this is functionally the same as using any keyword.

This completely stops traffic from 172.16.40.0 from getting out Ethernet 1. It has no effect on the hosts from the sales LAN accessing the marketing LAN and the internet since traffic to those destinations doesn’t go through interface E1. Any packet trying to exit out E1 will have to go through the access list first. If there were an inbound list placed on E0, then any packet trying to enter interface E0 would have to go through the access list before being routed to an exit interface.

Let’s take a look at another example of a standard access list. The following picture shows an internetwork of two routers with three LANs and one serial WAN connection.

You want to stop the Accounting users from accessing the Human Resources server attached to the Lab_B router but will allow other users access to that LAN. What standard access list would you create and where would you place it?

Before we move on to restricting Telnet access on a router, let’s take a look at one more standard access list example, but it will require some thought. In the following picture, you have a router with four LAN connections and one WAN connection to the Internet.

You need to write an access list that will stop access from each of the four LANs shown in the picture to the Internet. Each of the LANs shows a single host’s IP address, and from that, you need to determine the subnet and use wildcards to configure the access list.

Here is an example of what your answer should look like (starting with the network on E0 and working through to E3):

Okay, what would be the purpose of creating this list? If you actually applied this access list on the router, you’d effectively shut down access to the Internet, so what’s the purpose of even having an Internet connection? We wrote this exercise so you can practice how to use block sizes with access lists which is critical for your success when studying the CCNA objectives.

You’ll probably have a difficult time trying to stop users from telnetting to a large router because any active interface on a router is a fair game for VTY access. You could try to create an extended IP access list that limits Telnet access to every IP address on the router. But if you did that, you’d have to apply it inbound on every interface, and that really wouldn’t scale well to a large router with dozens, even hundreds, of interfaces, would it? Here’s a much better solution: Use a standard IP access list to control access to the VTY lines themselves.

Why does this work? Because when you apply an access list to the VTY lines, you don’t need to specify the Telnet protocol since access to the VTY implies terminal access. You also don’t need to specify a destination address since it really doesn’t matter which interface address the user used as a target for the Telnet session. You really only need to control where the user is coming from their source IP address.

Because of the implied deny any at the end of the list, the access list stops any host from telnetting into the router except the host 172.16.10.3, regardless of which individual IP address on the router is used as a target.