How to use “show” command to get information ?- CCNA Course 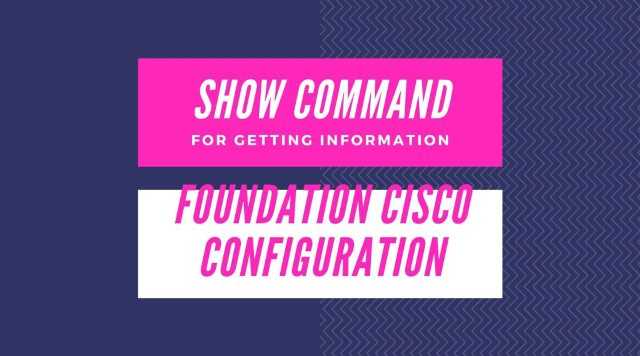 Using the show command to get information

As an administrator of cisco routers and switches, it is inevitable that you will get information and statistics to verify the functionality of those devices and the networks that are connected to them. The crux of every command to view these statistics is the show keyword. This article explains what information you can gain from several of these show commands and tells you how to interpret outputs of those commands.

Beyond a doubt, the next four show commands will serve as the most useful tools in determining interface functionality and the performance of the network connected to those interfaces. Some of the outputs for these interface-specific show commands display similar statistics; nevertheless, each command serves a unique purpose depending on what facet on the interfaces you are trying to investigate.

If you understand the interface statuses you are ultimately building a solid foundation to accurately troubleshoot any malfunctioning interface. For example, if your interface is in an “up/line protocol up” state, you have eliminated Layer 1 and layer 2 malfunctions for that interface. From this point, you can determine whether the problem on the interface is perhaps a Layer 3 problem (IP addressing, routing, and so on). The following table lists the possible values of this command.

The rest of the output of the show interfaces command is also extremely useful for gaining information about the interface and the network. Of course, you won’t be expected to know all the elements listed in this output; however, the following table displays some of the valuable common statistics descriptions.

If the goal of your show command is to get a condensed output of the status of the interface and their IP addresses, the show ip interface brief command conveniently shows you a minimal display of these statistics as illustrated here:

Although the output of the show controller command is unintelligible to everyone except for the Cisco TAC (Technical Assistance Center), one particularly useful extract from this output is in the show controller serial command. The needle in this haystack of statistics is the line of output that identifies whether a DTE or a DCE cable is attached to the serial interface. This is useful if you are connecting to your router remotely and you are not sure whether your router should be providing the clocking (if you are the DCE interface). The following excerpt example illustrates this useful output:

Now, we’ll discuss how to back up your IOS to a TFTP server or download a new version of the IOS to your router or switch. Tasks of this magnitude, however, cannot be performed unless you do some initial legwork. Namely, you must perform some essential steps such as identifying the amount of Flash memory, the IOS filename located in Flash, and the current IOS version that is running on the device.

Different Cisco IOS versions and feature sets will ultimately dictate the size of the IOS file and the amount of Flash and DRAM memory required to run the IOS. If you are planning to upgrade to a new IOS, you must make sure that you have enough memory (the more, the better) in your device. To see the amount of Flash you have and the current IOS file stored in Flash memory, utilize the show flash command as follows:

Typically, the filename of the IOS file in Flash correctly reflects the actual IOS version running currently on the device. However, an administrator can easily change the filename to his or her own purposes, or there could be multiple IOS files stored on the Flash and you are not sure which one is running currently. To ensure the correct version of the IOS, use the widely practical show version command.

As the following output demonstrates, the show version command displays a plethora of information well beyond the version of IOS running. The table given below explains some of the useful output of this multifaceted command.

Now, we’ll have a review break and give you the following table that contains the show commands discussed in this article, including their functions and whether they are in User EXEC or both User EXEC and Privileged EXEC.

Learn More about CCNA through our other articles like: