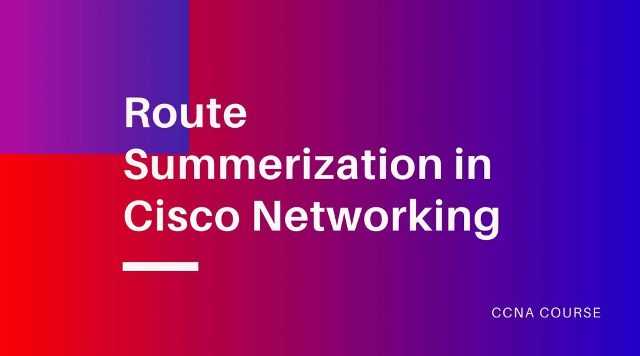 As already mentioned, classful routing protocols automatically summarized networks to the classful subnet boundaries. Classless routing protocols, on the other hand, require you to manually control the networks being summarized to your neighbors in the router configuration. By aggregating a contiguous set of networks into an advertised summarized route, you keep the size of the routing tables to a minimum.

Neighbors that receive the summarized route do not need to know about the individual subnets you create behind your router because they inevitably have to go through your router to get to them. The additional offshoot of this summarized picture is that your classless routing protocols do not need to notify those neighbors if one of those subnets goes down because they do not even have that subnet in their routing tables. Thus, you can isolate topology changes to be contained behind that summarizing router.

Because you are required to manually specify the networks you are to advertise, you must learn how to accurately summarize smaller subnets into one or several larger networks, or supernets. The rules for supernetting are similar to subnetting, except, in this case, you are stealing bits from the network portion of an IP network to create a larger network. The rules for super netting are as follows:

The beauty of supernetting is that the resultant network and subnet mask will designate many IP address networks in a single entry. The fact that you are stealing bits from the network portion of an IP address could quite easily violate the traditional barriers of classful addressing, known as Classless Interdomain Routing (CIDR).

The following figure illustrates a typical route summarization example in which Router B is summarizing all its subnetted networks to Router A as one supernetted network. Following the steps outlined previously, you can determine the aggregate network entry to advertise, as follows:

By creating the summary route 192.168.64.0/19, Router A is required to maintain only that one entry in its routing table as opposed to the individual 32 subnets. If a topology change occurs in one of the subnets behind Router B, there is no need to advertise that changes to Router A because it knows about only the summarized network.

For instance, Broder Gateway Protocol (BGP) is a routing protocol that is used by ISPs for routing traffic over the Internet. Because the Internet comprises thousands of networks, each under different administrative control, you need to use an Exterior Gateway Protocol such as BGP to route in between these autonomous systems.

In addition to being an IGP/EGP or classful or classless, routing protocols can also fall into one of three classes. Again, the functionality and characteristics of the routing protocol dictate under which class it falls. The most long-standing of these classes are distance vector routing protocols.

In fact, they broadcast the contents of the entire routing table to their neighbors periodically, regardless of whether there is a change in the network topology. When the neighbors receive that routing information, they identify and add any new networks to their routing tables and update the metric before eventually passing it on to their neighbors.

Because the routing table information is updated before it is sent on to neighbors, downstream routers do not learn that information first hand. For this reason, distance vector routing protocol update processing is often referred to as “routing by rumor”.

As the name states, link-state routing protocols advertise the state of the links in the network. In fact, they advertise the states and metrics (cost) of all the links they know about for the entire topology to their neighbors, as opposed to just the best routes in your routing table.

This detailed overview of the entire routing domain enables each router to calculate and make a decision on the best route from this first-hand information, rather than listen to what its neighbors believe is the best route.

In fact, link-state routing protocols keep three tables; a neighbor table of all discovered neighbors, a topology table of all the possible routes to reachable networks learned, and a routing table that contains the best route based on the lowest metric calculated from the topology table.

At first, this may sound like a lot of information to be exchanged between routers; however, link-state routing protocols initially discover their neighbors when they first boot up and synchronize their topology tables.

After the neighbor discovery and topology synchronization, they send only periodic hello messages to let their neighbors know they are still functioning. This is significantly different from distance vector routing protocols that periodically exchange the entire routing table, which can contain a large amount of information, depending on the size of the network.

In addition, link-state routing protocols react much faster when a topology change occurs in the network. In fact, these protocols were initially created in response to the slow convergence issues that you typically encounter with distance vector routing protocols. The downfall of these routing protocols is the resources they consume in the router. Namely, maintaining and processing three tables consume quite a bit of memory and processor power.

Now that you have learned about several types of routing sources, including Static routes and Dynamic Routes protocols, it’s time to revisit the routing table and solidify how network entries are added and used in routing decisions. To help illustrates this process, refer to the following show IP route output:

Gateway of last resort is not set

The number to the left of the forward slash is the administrative distance of the routing protocol. The number to the right of the forward slash represents the metric that is being used by the routing protocol to determine the best path to the destination network. This information is immediately followed by the router from which it learned this information (thus, the next-hop address). The last item in the routing entry represents the interface packets that must exit to reach those networks.

If there isn’t a match for the network lookup, the packet is forwarded to its default route. If the gateway of last resort is not set (as in this show IP route output), the packet is dropped, and an ICMP destination unreachable message is sent back to the source to indicate that the destination cannot be reached. In the show ip route output, several entries for the 10.0.0.0 network are listed in the routing table.

Cisco’s routing logic answers this question by using a rule called the longest match. The longest match rule states that when a packet has multiple possible network entries to use, the more specific subnet is used over the less specific. In other words, the longer the number of bits in the subnet mask (thus the smaller subnet), the more chance it has of being the chosen network. In the routing table example, a packet destined for 10.1.0.3 would use the subnet with the longest prefix (subnet mask), which is the EIGRP route for 10.1.0.0/16 existing interface serial 0/0/0.

You are likely to encounter in your Cisco travels certain situations in which you must run multiple routing protocols in your network. For instance, your company is in the process of merging with another company’s network, and their routers are running a different routing protocol than yours. In addition, you may have to connect your Cisco router network to a non-Cisco routing infrastructure and you are using Cisco proprietary routing protocols.