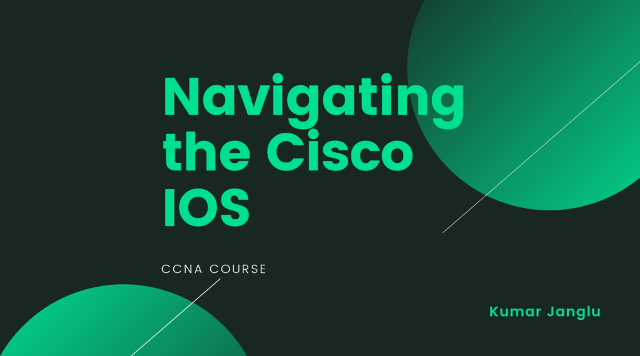 By now, you have a new-found love and respect for your Cisco equipment after knowing all the work that occurs when you turn on your router or switch.

What better way to prove that love and respect but by mastering the IOS that the Cisco devices have so painstakingly found and loaded for your administration and configuration pleasure? This article looks at the hierarchical levels of the IOS and what type of interactivity you can encounter at each level.

At your company, you may have level 1 technicians who are not strong in Cisco fundamentals, thus, you want to ensure only that they have access to basic troubleshooting and statistics without worrying that they might change the configuration or cause some other network catastrophe. Because a multitude of administrators might need to gain access to these Cisco devices, it makes sense to ensure that the first level of IOS hierarchy they encounter is somewhat limited in the extent of what can be done. This is the nature of User EXEC.

In User EXEC, you are limited in the number and type of commands that are available to you. For instance, the majority of show commands are available at this level of the IOS hierarchy because they do not detrimentally affect the router or the switch to perform these commands.

In addition, you can test IP connectivity to other devices with ping as well as remotely administer other devices or troubleshoot all the way to Layer 7 with Telnet. The Cisco IOS prompt for User EXEC is signified by the greater than sign (>) following the hostname of the Cisco device. For example, a cisco router and switch with their default hostnames would look like Router> and Switch>, respectively. The following figure displays the commands that you have available at User EXEC.

Assuming you need to acquire more functionality from your Cisco devices beyond basic troubleshooting and statistical displays, you have to have anther layer of the Cisco IOS hierarchy in which you have access to all commands. Happily named, Privileged EXEC is the next level of the IOS, in which you have the same commands as you do in User EXEC, as well as some commands that can alter the Cisco device’s functionality.

For example, in Privileged EXEC, you can perform debug commands that can show you hundreds of real-time routing and switching functions and report them to the console. Because this can cause quite a processing strain on the device, these commands are reserved for only those who can access Privileged EXEC. Additionally, some show commands such as show startup-config and show running-config can be seen only by those who should be able (privileged) to see the configuration of the devices (including passwords). Some other new and dangerous commands available in Privileged EXEC include delete, clear, erase, configure, copy, and reload (reboots the device), to name a few.

To gain access to Privileged EXEC, type the command enable from User EXEC. After you press Enter, the prompt changes from > to #, signifying that you are now in Privileged EXEC mode. Because anybody can read this section and learn how to get to these commands, it makes sense to have some way for the IOS to prompt for a password to authorize those who truly should be granted access. In the future article, we’ll discuss how to apply these passwords to restrict who gains access from User EXEC to Privileged EXEC. To return back to User EXEC, the reverse command is disabled.

You can recognize it by looking at the command prompt, which will reflect Router (config)# for routers and switch (config)# for Switches.

The following figure displays a partial output of just some of the commands that are available in Global Configuration. Note that the commands delete, debug, clear, configure, and copy do not show up in the list of commands. You have a different set of commands available to you at this level of the IOS versus Privileged and User EXEC. This means that you must exit Global Configuration to use these commands as well as the show, reload, and other Privileged EXEC specific commands.

Of equal note, after you enter a command in the IOS, it is immediately applied to running-config and applied to the device’s operation. The configurations are not listed and then applied later like batch files or executed compiled programs. Configuration help is shown in the following figure.

Also accessed from Global Configuration, line configuration are specific to those EXEC lines through which a user can gain access to the Cisco device. Specifically, you can configure options such as logins and passwords for a user trying to gain User EXEC access to the console and auxiliary ports, as well as the 5 vty (virtual teletype) Telnet lines into a router or switch. From Global Configuration, you must utilize the keyword, line, followed by the EXEC line you want to configure. For example, to configure console-specific commands, you would type line console 0 from Global Configuration. The prompt changes to Router (config-line)#, regardless of the line you are configuring.

Quite often, the list of available commands may extend beyond one terminal screen. This is apparent because the string More is displayed at the bottom of the list on the screen. To see the next page of listed commands, you can press the space bar and the command list scrolls another terminal screen’s length. If you prefer to see the commands line by line, you can keep hitting the Enter key and it displays only the next command each time you press it. On the chance that you have found the command you were looking for in the list, you can hit any key (pause for inevitable “where’s any key?” joke) to get back to the command prompt.

Keep in mind that many commands in the IOS require a string of keywords to comprehend what you are trying to achieve with the command. For instance, if I was searching for the command logging and hit the enter key, the IOS would report back an error to the terminal screen that the command was incomplete because it does not understand where I want to send my logging information. If you are unsure of the commands available, once again, you use the question mark for command help. In this case, you must put a space after the first keyword followed by the question mark. The IOS then displays a list of commands that are valid after the keyword logging, as displayed here:

To make terminal editing simpler and faster, Cisco has created several shortcut keystrokes that can speed up IOS navigation. The most useful of these shortcuts enable you to cycle through your command history to re-use or edit previously typed commands. You can use both the up and down arrows keys or Ctrl+N and Ctrl+P (if arrow keys are not supported at your terminal) to cycle through the last 10 commands in the history buffer relative to the level of the IOS you are currently located. The following table lists some other useful terminal editing keystrokes that will help you navigate within a command line.

Suppose you are back in the interface configuration and you need to ping or traceroute to your neighbor or do a show command to verify that the interface is working. Recall that this variety of commands can be performed only in Privileged EXEC or User EXEC. To return to these levels of the IOS hierarchy, you can type exit until you are all the way back. You can also use the keystroke Ctrl+Z or the keyword end, which will automatically take you back to Privileged EXEC, regardless of how deep in the configuration levels you happen to be.

As mentioned before, the IOS reports back error messages if you have not provided the correct syntax for a command. The three syntax error messages that you may encounter are as follows:

Below is an example for each of these three error console messages. Also, notice that this configuration snapshot now includes abbreviations to get into Privileged EXEC and Global Configuration.