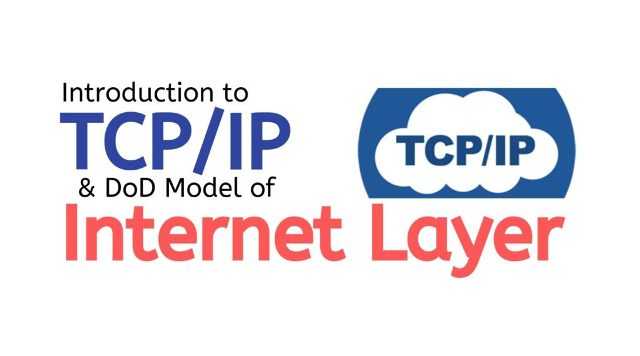 In this article, we will have a brief introduction to TCP/IP and DoD Model of Internet Layer.

The Transmission Control Protocol/Internet Protocol (TCP/IP) is a standard that includes many protocols. It defines how machines on an internetwork can communicate with each other.

It was initially funded by and developed for the Defense Advanced Research Projects Agency (DARPA), which is a conglomeration of US military and government organizations. Developed initially for the government, it was later made available to the public, mainly seen on Unix systems.

First specified in RFC 791, it has become the de facto standard for networking protocols. The internet uses TCP/IP to carry data between networks, and most corporations today use TCP/IP for their networks.

The DoD model is basically a condensed version of the OSI Model. It’s composed of four, instead of seven, layers:

The picture below shows a comparison of the DoD model and the OSI Reference Model. As you can see, the two are similar in concept, but each has a different number of layers with different names.

A vast array of protocols combine at the DoD model’s Process/Application layer to integrate the various activities and duties spanning the focus of the OSI’s corresponding top three layers (Application, Presentation, and Session). We’ll be looking closely at those protocols in the posts ahead.

The Host-to-Host layer parallels the functions of the OSI’s Transport layer, defining protocols for setting up the level of transmission service for applications.

It tackles issues such as creating reliable end-to-end communication and ensuring the error-free delivery of data. It handles packet sequencing and maintains data integrity.

The internet layer corresponds to the OSI’s Network Layer, designating the protocols relating to the logical transmission of packets over the entire network. It takes care of the addressing of hosts by giving them IP (Internet Protocol) address, and it handles the routing of packets among multiple networks.

The DoD and OSI models are alike in design and concept and have similar functions in similar layers. The figure below shows the TCP/IP protocol suite and hot it protocols relate to the DoD model layers.

In the articles ahead, we’ll look at different protocols in more detail, starting with the Process/Application Layer Protocols.