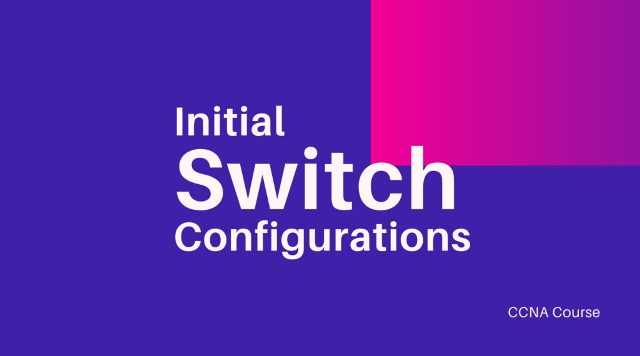 Catalyst switches, for the most part, are designed so that the default state of the switch allows for basic layer 2 functionality without requiring any configuration from the administrator. For example, the physical interfaces on the switch are already enabled, which means that you can plug a cable in the switch and the interface operates without requiring you to perform a no shutdown on that interface. Does that mean you don’t have to learn about catalyst switch commands? No such luck.

The majority of the administrative configurations such as configuring hostnames, login banners, passwords, and telnet/SSH access are identical to the configurations of the router IOS, as described in the article “Foundation Cisco IOS operations”.

Assigning a Management IP address to a switch

Cisco Layer 2 switches forward frame solely based on MAC addresses. On the other hand, Layer 3 switches and routers use IP addresses in their data forwarding decisions. So why assign an IP address to a Layer 2 switch?

We have an article “Foundation Cisco configuration” where we mentioned that to remotely manage a device via SSH, Telnet, or HTTP, you need to have IP connectivity to the switch. Likewise, if you were to manage the switch using SNMP, you would also have to program your management server to use its IP address to gather statistics from the switch. All these management functions assume that an IP address is assigned to the device, which in the catalyst switch’s case does not have an IP address in its default configuration.

If you were to Telnet into the switch from the terminal on the far network, the Telnet traffic would traverse through the local router, across the WAN link, through the remote router, and finally to the switch. To return the Telnet traffic back to the terminal, the switch would have to send it to a routing device, because the terminal is on another network. To instruct the switch to send any traffic destined for another network to that router, you have to define a default gateway (also known as a gateway of last resort) as shown in the picture below.

1 interface as opposed to a physical port on the switch:

The command to configure a default gateway is ip default-gateway, followed by the IP address of the router that is on the switch’s segment in Global configuration. Using the example in the above picture, the configuration would look like the following:

By design, switches may have a plethora of interfaces that may require a similar configuration. For instance, if the first 20 ports of your switch need to be set to a speed of 100mbs and full-duplex, you would be undertaking quite an administrative task of typing the same commands into each interface configuration for all 20 interfaces. To save time, the catalyst switch’s IOS contains a navigation and configuration command shortcut called interface range that enables you to define a range of switch ports and configure them simultaneously. The configuration can be condensed to something like this:

STP is enabled by default on all Cisco Catalyst switches. In fact, if you are running multiple VLANs(Virtual LANs) on your switch, Cisco switches run an instance of STP on each VLAN configured. With that being said, no configuration is required unless you want to alter the default parameters of STP or manually define optimal switching paths or designated certain switches as root bridges.

One of the common configurations you might encounter in your travels is to change the default priority of a switch to ensure that it will win the election for root bridge. To configure this option, you have to define which VLAN’s priority you want to change and give value in increments of 4096. For instance, if you wanted your switch to be the root bridge for VLAN 1, you would configure the following in global configuration:

Cisco also created a command that automatically changes the switch’s priority to become the root bridge for a given VLAN:

If you wanted to change the default cost calculations for a specific interface to ensure that a port becomes a forwarding interface, you could change the spanning-tree cost on any interface by entering interface configuration mode and using the following commands:

To verify spanning tree operation in your switch, you can issue the show spanning-tree command to see a display of the STP operations for each VLAN. If you want to see specific information regarding a particular VLAN or interface, you can also add additional keywords after the command to see the output for only those items. The following output from show spanning-tree displays the STP statistics for VLAN 1:

Notice in this output that you can see the MAC address and the priority of the root bridge and the local switch (which happens to be the root bridge for this VLAN). In addition, you can see the timers using 802.1d for port state transitions, including the max age and forward delay. Finally, this useful show command displays the interfaces that are active and participating in STP and their associated roles and states in the spanning tree network.