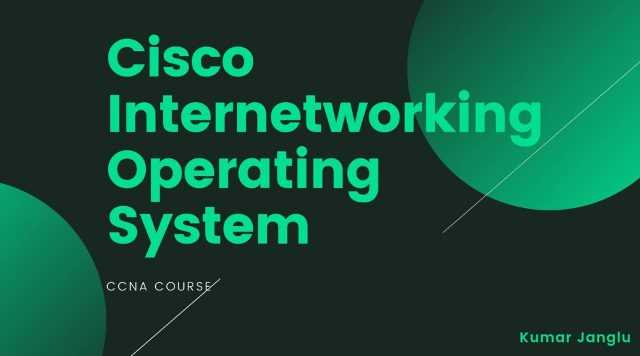 Cisco IOS software is developed and maintained by Cisco to support a full array of system functions, applications (including Internet applications), and network hardware in a single software package.

IOS software is installed on each Cisco router or switch and can accommodate network growth and provide for secure data transfers. The command-line interface (CLI) for routers and switches defines the commands that are used to communicate with the IOS.

Cisco releases IOS software using what they call trains. Each release can be further defined by train identifiers. A train identifier determines whether a release is a Technology (T), Enterprise, or Service Provider (SP) release.

A feature set is a package of the features that are offered in addition to the basic IOS functions of an IOS software release. You can select more than one feature set per release.

Feature sets may be identified as standard, enhanced, or advanced, depending on the services that are supported. To give you an idea of the latest features available with Cisco IOS, current releases offer the following software functionalities:

The IOS image file represents the name of the system image on a Cisco router or switch. The hardware platform, feature set, compression format, IOS version, and train information are all found in the name of an IOS image file.

An IOS image filename can be broken out to identify more specific information about the  IOS in use by a device. This is helpful if you are troubleshooting a system issue and need to verify what version is currently in use. Cisco may be aware of an IOS bug, or the version may simply be outdated and an IOS upgrade might be the solution to your trouble.

To find the IOS image filename, use the show version command from the command prompt.

Given the example filename c2600-ipbase-1.122-1.T.bin (.bin indicates binary format), from left to right, each portion of the filename represents the following:

Cisco offers a wide selection of router models for network implementations. The Cisco family of routers can accommodate networks that range in size and require various network interfaces for WAN connectivity.

As mentioned, some router models are fixed port and fixed configuration, whereas others are modular-port routers. To help you prepare for the CCNA exam, a Cisco 2500 series router model can perform a broad range of the basic routing functions. This router can provide you with sufficient functionality to practice initial router setup and configurations.

The 2500 series hardware can support CSU/DSU, Ethernet, token ring, asynchronous or synchronous serial, and ISDN connections. The 2500 series routers coupled with Cisco IOS software can support routed protocols such as IP, Novell IPX, and AppleTalk. They can also support a wide array of routing protocols. Although most of the 2500 family routers are fixed port, the 2524 and 2525 models are both modular-port routers.

In addition to the 2500 series routers, Cisco also offers the following router series:

Learn Free CCNA Course with our free articles. we have provided course starting from the very basics of Internetworking to advanced level.

The Cisco family of switches includes the Catalyst switch models, which you have learned in our another article might use the Cat OS rather than the IOS.

As with Cisco routers, the switch model numbers increase as they are upgraded for enhanced overall operability. Various switches have been developed over the years to accommodate the size and functionality requirements of LAN’s around the world.

You may have a Cisco 1900, 2800, 2900, or 2924 switch to help you study for the Cisco Certified Network Associate exam. These models should be easy to find and affordable, and they cover all the features necessary for the exam when coupled with Cisco IOS.

Cisco switches may also support PoE. PoE enables an end device to receive power over a copper Ethernet cable. End devices that might use PoE include wireless access points, IP telephones, video cameras, and card scanners. This technology was originally developed by Cisco and called “inline power.” IEEE has since standardized PoE with 802.