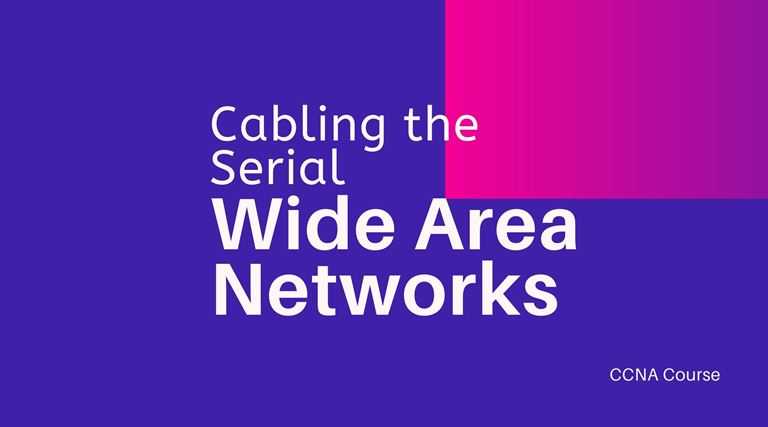 As you can imagine, there are a few things that you need to know before connecting your WAN in order to make sure everything goes well. For starters, you have to understand the kind of WAN physical layer implementation that cisco provides as well as ensure that you’re familiar with the various types of WAN serial connectors involved.

The good news is that cisco serial connections support almost any type of WAN service. Your typical WAN connection is a dedicated leased line using HDLC, PPP, and frame relay with speeds that can kick it up to 45Mbps (T3).

HDLC, PPP, and frame relay can use the same physical layer specifications, and we’ll go over the various types of connections and then move on to telling you all about the WAN protocols specified in the CCNA objectives.

WAN serial connectors use serial transmission, something that takes place 1 bit at a time over a single channel.

Cisco routers use a proprietary 60-pin serial connector that you have to get from cisco or a provider of cisco equipment. Cisco also has a new, smaller proprietary serial connection that’s about one-tenth the size of the 60-pin basic serial cable called the “smart serial” we’re not sure why. But we do know that you have to make sure you have the right type of interface in your router before using this cable connector.

The type of connector you have on the other end of the cable depends on your service provider and their particular end-device requirements. There are several different types of ends you’ll run into:

Make sure you’re clear on these things: serial links are described in frequency or cycles per second (hertz). The amount of data that can be carried within these frequencies is called bandwidth. Bandwidth is the amount of data in bits per second that the serial channel can carry.

By default, router interfaces are data terminal equipment (DTE), and they connect into data communication equipment (DCE) like a channel service unit/data service unit (CSU/DSU). The CSU/DSU then plugs into a demarcation location (demarc) and is the service provider’s last responsibility. Most of the time, the demark is s jack that has an RJ-45 (8-pin modular) female connector located in a telecommunications closet.

Actually you may already have heard of demarking. If you’ve ever had the glorious experience of reporting a problem to your service provider, they’ll usually tell you everything tests out fine up to the demark, so the problem must be the CPE, or customer premises equipment.

In other words, it’s your problem, not theirs.

The following picture shows a typical DTE-DCE-DTE connection and the devices used in the network. The idea behind a WAN is to be able to connect two DTE networks through a DCE network. The DCE network includes the CSU/DSU, through the provider’s wiring and switches, all the way to the CSU/DS at the other end. The network’s DCE device (CSU/DSU) provides clocking to the DTE-connected interface (the router’s serial interface).

As mentioned, the DCE network provides clocking to the router, this is the CSU/DSU. If you have a non-production network and you’re using a WAN crossover type of cable and do not have a CSU/DSU, then you need to provide clocking on the DCE end of the cable by using the clock rate command that we showed you in Introduction to Cisco Router and Switches article.

The high-level data link control (HDLC) protocol is a popular ISO-standard, bit-oriented, data link layer protocol. It specifies an encapsulation method for data on synchronous serial data links using frame characters and checksums. HDLC is a point-to-point protocol used on leased lines. No authentication can be used with HDLC.

HDLC is the default encapsulation used by the Cisco routers over synchronous serial links. And cisco’s HDLC is proprietary it won’t communicate with any other vendor’s HDLC implementation.

But don’t give cisco grief for it everyone’s HDLC implementation is proprietary. The following picture shows the Cisco HDLC format.

As shown in the picture, he reason that every vendor has a proprietary HDLC encapsulation method is that each vendor has a different way for the HDLC protocol to encapsulate multiple Network layer protocols. If the vendors didn’t have a way for HDLC to communicate the different layer 3 protocols, then HDLC would only be able to carry one protocol. This proprietary header is placed in the data field of the HDLC encapsulation.

So let’s say you only have the one Cisco router, and you need to connect to a non-cisco router because your other cisco router is on order. What would you do? You couldn’t use the default HDLC serial encapsulation because it wouldn’t work. Instead, you would use something like PPP, an ISO-standard way of identifying the upper-layer protocols. You can check out RFC 1661 for more information on the origins and standards of PPP. Let’s discuss PPP in more detail and how to connect to routers using the PPP encapsulation.

Let’s spend a little time on the Point-to-Point Protocol (PPP). Remember that it’s a Data Link Layer Protocol that can be used over either asynchronous serial (dial-up) or synchronous serial (ISDN) media. It uses Link Control Protocol (LCP) to build and maintain data-link connections. Network Control Protocol (NCP) is used to allow multiple Network layer protocols (routed protocols) to be used to a point-to-point connection.

Since HDLC is the default serial encapsulation on cisco serial links and it works great, why and when would you choose to use PPP? Well, the basic purpose of PPP is to transport layer 3 packets across a data link layer point-to-point link, and it’s non-proprietary. So unless you have all Cisco routers, you need PPP on your serial interfaces the HDLC encapsulation is Cisco proprietary, remember? Plus, since PPP can encapsulate several layer 3 routed protocols and provide authentication, dynamic addressing, and callback, PPP could be the best encapsulation solution for you instead of HDLC.

The following picture shows the protocol stack compared to the OSI Reference model.

Burn it in your mind that the PPP protocol stack is specified at the Physical and Data Link layers only. NCP is used to allow communication of multiple Network layer protocols by encapsulating the protocols across a PPP data link.