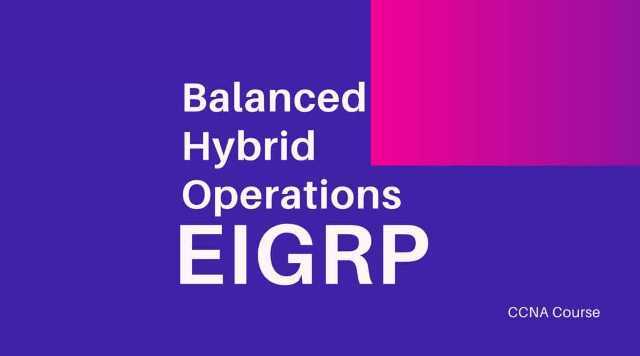 One of the most notable features that EIGRP offers is the use of a robust 32-bit composite metric. Specifically, EIGRP uses bandwidth and delay (each multiplied by 255 to make them 32-bit) as its default metrics to determine the best routing path to a destination. In addition, you can configure EIGRP to include additional metrics such as reliability, load, and MTU. By using this more robust composite metric (as opposed to using hop count or cost based on bandwidth), routers can accurately determine the best path to take a destination. For example, in the picture given below, RIPv2 would take the T1 link as the best route to reach 172.17.0.0, because it has the fewest hops.

EIGRP, on the other hand, considers the bandwidth of the link and determines that the bottom path is the optimal route, because the Fast Ethernet links combined are still faster than a single T1 or 1.54Mbps.

Because EIGRP metrics can vary considerably depending on the bandwidth and delay of the links to the destination, EIGRP also can support load balancing up to six unequal paths (as opposed to RIP’s and OSPF’s equal paths). What’s more, EIGRP can support larger networks than RIP, because its maximum hop count is 244 as compared to RIP and RIPv2’s 15 hops. EIGRP still requires a maximum hop count, because it shares some characteristics of distance vector routing protocols and uses mechanisms to avoid routing loops.

Because EIGRP is a true hybrid routing protocol, it has taken some of the best features of link-state routing protocols too. For instance, EIGRP discovers its neighbors and builds a topology table by sending hello messages as a multicast to the reserved multicast address of 224.0.0.10. after the neighbors are discovered, they synchronize their topology databases and send hello messages afterward to keep their dead timers from expiring. The time differs depending on the topology, just as you saw with OSPF. Specifically, point-to-point and broadcast topologies have a 5-second hello interval and 15-second dead timer, whereas nonbroadcast multi-access topologies such as Frame Relay have a 60-second hello interval and 180-second dead timer.

Cisco, however, did not stop there with the features of this balanced hybrid routing protocol. It developed a new routing algorithm called the Diffusing Update Algorithm (DUAL) that ensures a 100% loop-free routing environment that can converge in the face of a topology change in a split second. EIGRP also can route not only IP but also IPX and AppleTalk routed protocols in your network if you have an older Novell or Macintosh environment.

Last but not least, EIGRP is classful by default but can be configured to be classless, similar to RIPv2. By disabling automatic summarization, you can support VLSM designs and discontinuous networks, as well as manually summarize networks at any bit boundary you want.

The only significant downfall of this routing protocol is that all your routers must be Cisco routers (not that this is a bad thing) to support this proprietary routing protocol.

The secret of EIGRP’s rapid convergence is found in its topology table. Just like OSPF, EIGRP stores all possible routes in the database and calculates the best path to each subnet, based on the lowest cumulative composite metric. Those best routes are known as the successor routes.

EIGRP keeps track of the composite metric for every subnet that is being advertised to it by neighbor routers, known as the advertised distance. The router also tracks that advertised distance plus the composite metric to reach that advertising router from the local router, known as the feasible distance. The lowest feasible distance to a particular subnet becomes the successor route and is the path that is also placed in the routing table.

Where EIGRP sets itself apart from OSPF is that it keeps an ace up its sleeve, so to speak. If the conditions are correct, EIGRP keeps a backup route in its topology table known as the feasible successor. In the event that a successor route fails, the feasible successor becomes the successor’s route and is placed in the routing table in about one second.

You already know that the feasible successor route in the topology table is used if the primary successor route fails. So what happens if there isn’t a feasible successor, as illustrated in the picture below. In this picture, you see a glimpse of Router D’s topology table for the 172.17.0.0/16 subnet. The P next to the network stands for the passive state, which in EIGRP terms is actually a good thing.

Now let’s see what happens when the successor route to Router B fails, as shown in the picture below. Without a feasible successor route to 172.17.0.0, Router D puts that network into an active state. The network is active because the router begins to actively query its directly connected neighbors about whether they have a route to the affected network. This is considerably different from and less resource-intensive than OSPF, because the route only asks its neighbors, as opposed to flooding the update throughout the area.

When Router A responds to Router D’s query, it adds that entry to its topology table, which in turn becomes the new successor route and is placed in the routing table. To ensure a loop-free environment, Router D has to wait for all queries to come back before implementing the new route. That is why EIGRP routers start what is known as a Stuck in Active (SIA) timer, which is how long it waits for a response from a query. The default SIA timeout is 180 seconds.

It should come as no surprise that EIGRP borrowed another link-state concept to improve routing convergence and gave router resources. Similar to an OSPF stub area, EIGRP allows you to configure what is known as EIGRP stub routing. This configuration is most useful in instances where the network is designed in a hub-and-spoke topology, as shown in the picture below.

Because each of the remote routers (Routers B, C, and D) all have to pass data through the central Router A to reach the remotes, it does not make sense for EIGRP devices to act as they normally would when a topology change occurs. For example, if the 172.16.0.0 network connected to Router B goes down, what good does it do for the routers to go into an active state for that link and query its neighbors for an alternate route?

There is only one way in and out of that network (because that is the defining characteristic of a stub network). By configuring the remote routers as stub routers (the central, or hub, router does not need to be configured), the routers immediately respond to the query as “inaccessible” and speed up the time it takes to converge the network