A Brief Introduction to Data Encapsulation in Networking – CCNA Course 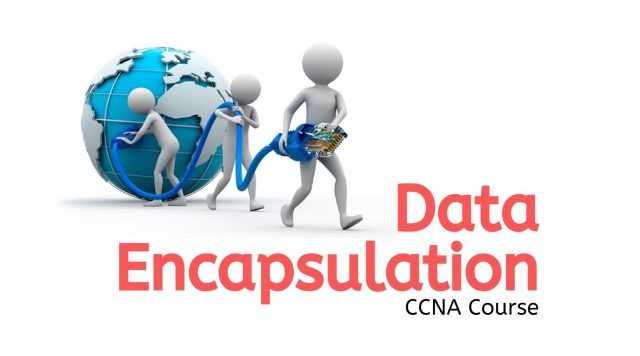 In this article, we are going to see some brief introduction to Data Encapsulation in Networking which is covered under our CCNA course.

When a host transmits data across a network to another device, the data goes through encapsulation. It is wrapped with protocol information at each layer of the OSI Model. Each layer communicates only with its peer layer on the receiving device.

To communicate and exchange information, each layer uses Protocol Data Units (PDUs). These hold the control information attached to the data at each layer of the model.

They are usually attached to the header in front of the data field but can also be in the trailer, or end, of it. Each PDU attaches to the data by encapsulating it at each layer of the OSI model, and each has a specific name depending on the information provided in each header.

This PDU information is read only by the peer layer on the receiving device. After it’s read, it’s stripped off and the data is then handed to the next layer up.

The figure below shows the PDUs and how they attach control information to each layer. This figure demonstrates how the upper-layer user data is converted for transmission on the network.

The data stream is then handed down to the Transport layer, which sets up a virtual circuit to the receiving device by sending over a synch packet.

Next, the data stream is broken up into smaller pieces, and a Transport layer header (a PDU) is created and attached to the header of the data field; now the pieces of data is called a segment. Each segment is sequenced so the data stream can be put back together on the receiving side exactly as it was transmitted.

Each segment is then handed to the Network layer for network addressing and routing through the internetworking. Logical addressing (for example, IP) is used to get each segment to the correct network.

The Network Layer protocol adds a control header to the segment handed down from the Transport layer, and what we have now is called a packet or datagram.

Remember that the transport and network layers work together to rebuild a data stream on a receiving host, but it’s not a part of their work to place their PDUs on a local network segment which is the only way to get the information to a router or host.

It’s the data link layer that is responsible for taking packets from the network layer and placing them on the network medium (cable or wireless).

The data link layer encapsulates each packet in a frame, and the frame’s header carries the hardware address of the source and destination hosts. If the destination device is on a remote network, then the frame is sent to a router to be routed through an internetworking.

The receiving devices will synchronize on the digital signal and extract (decode) the 1s and 0s from the digital signal. At this point, the devices build the frames, run a CRC, and then check their answer against the answer is the frame’s FCS field. If it matches, the packet is pulled from the frame and what’s left of the frame is discarded. This process is called de-encapsulation.

It then happily hands the data stream to the upper-layer application.

At a transmitting device, the data encapsulation method works like this:

To explain this in more detail using the layer addressing I’ll use the following figure.

Remember that a data stream is handed down from the upper layer to the transport layer.

As technicians, we really don’t care who the data stream comes from because that’s really a programmer’s problem. Our job is to rebuild the data stream realiably and hand it to the upper layers on the receiving device.

Before we go further in our discussion of the above figure, let’s discuss port numbers and make sure we understand them. The Transport layer uses port numbers to define both the virtual circuit and the upper-layer process, as you can see from the figure below.

The transport layer takes the data stream, makes segments out of it, and establishes a reliable session by creating a virtual circuit. It then sequences (numbers) each segment and uses acknowledgments and flow control. If you’re using TCP, the virtual circuit is defined by the source port number.

The Network layer adds a header, and adds the logical addressing (IP addresses), to the front of the each segment. Once the header is added to the segment, the PDU is called a packet. The packet has a protocol field that describes where the segment came from (either UDP or TCP) so it can hand the segment to the correct protocol at the Transport layer when it reaches the receving host.

The network layer is responsible for finding the destination hardware address that dictates where the packet should be sent on the local network. It does this by using the address resolution protocol (ARP).

IP at the Network layer looks at the destination IP address and compares that address to its own source IP address and subnet mask. If it turns out to be a local network request, the hardware address of the local host requested via an ARP request. If the packet is destined for a remote host, IP will look for the IP address of the default gateway (router) instead.

The packet, along with the destination hardware address of either the local host or default gateway, is then handed down to the Data link layer. The Data link layer will add a header to the front of the packet and the piece of data then becomes a frame. (we call is a frame because both a header and a trailer are added to the packet, which makes the data resemble bookends or a frame, if you will). This is shown in the last picture above.

The frame uses an Ether-type field to describe which protocol the packet came from at the Network layer. Now a cyclic redundancy check (CRC) is run on the frame, and the answer to the CRC is placed in the frame check sequence field found in the trailer of the frame.

The frame is now ready to be handed down, one bit at a time, to the Physical layer, which will use bit timing rules to encode the data in a digital signal. Every device on the network segment will synchronize with the clock and extract the 1s and 0s from the digital signal and build a frame. After the frame is rebuilt, a CRC is run to make sure the frame is okay. If everything turns out to be all good, the hosts will check the destination address to see if the frame is for them.